A Texas teacher was filmed launching a vile, racist and xenophobic rant against a Muslim woman in a grocery store parking lot, and her explicit tirade cost her job.

Mai Mohamed was in the parking lot of a Kroger grocery store in west Houston on Sunday when the female teacher approached her and started shouting at her, targeting her hijab.

Mohamed has been living in Houston for the past three years on a visa from Egypt with her husband and four children. She says she was filling her water bottle outside the store when the unidentified woman allegedly stared at her, approached, and began to berate her. 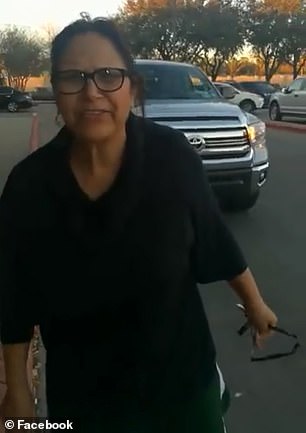 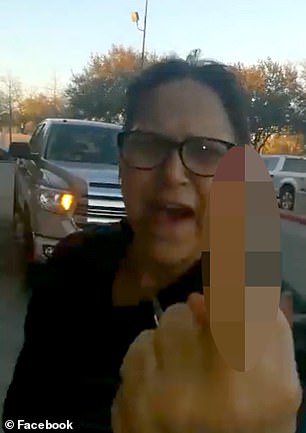 Muslim woman Mai Mohamed was verbally assaulted as she was standing outside a Kroger grocery store in Houston, Texas on Sunday by another female customer (above) who allegedly took issue with her hijab and said: ‘Get the f**k back to your country, b***h’ 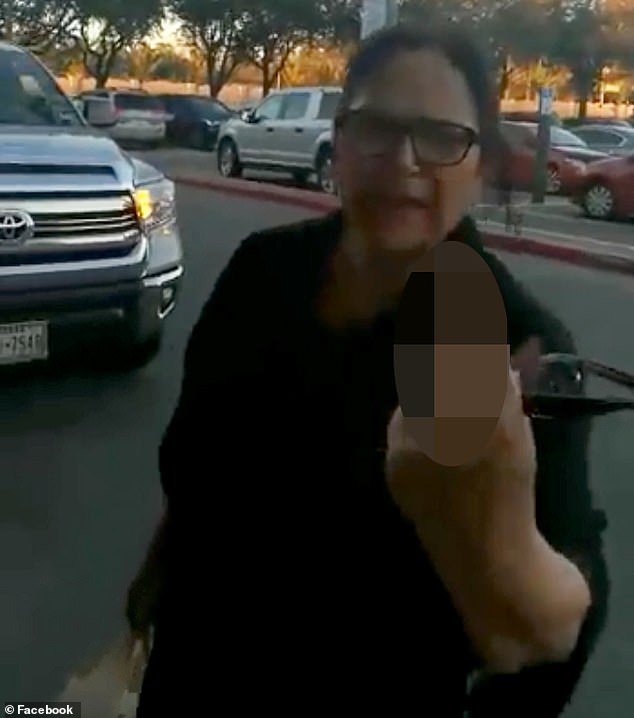 Mohamed whipped out her phone to record the tirade and replies in a shaky voice: ‘Again please? Oh, oh, I’ll put it on social media.’

When an employee says something to the two yelling women, the woman says: ‘This lowlife needs to go back to her country’.

Mohamed then filmed the store employee stationed at the front of the Kroger saying: ‘Did you hear what she said? Did you hear?’

The employee asked what she said adding, ‘Y’all need to carry along. I need you to get the camera off’, rather than listening to her as she shakily tries to explain the verbal assault.

‘I’m in Kroger. That’s what happened. Bad woman and one also bad worker tell me like this,’ Mohamed said to the camera as she walked towards her car.

‘I felt hate when she looked at me. I don’t know why,’ Mohamed said to the Houston Chronicle on the incident.

The video was then posted on Facebook by Mohamed’s friend Fatima Loughlin-Saleh on Sunday. 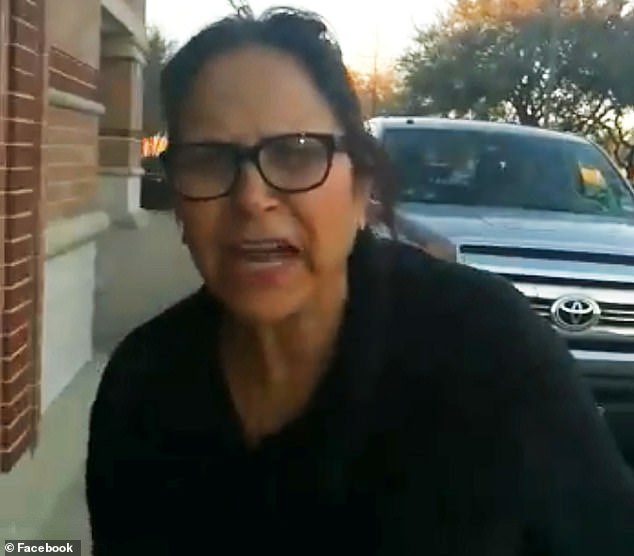 She reportedly approached Mohamed as she was filling her water bottle outside of the Houston Kroger, eyed her hijab, then started making comments that escalated into the tirade 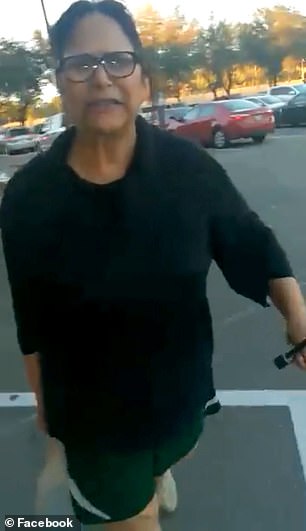 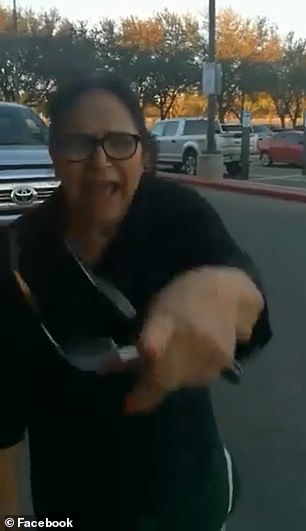 Mohamed has been living in Houston for the past three years on a visa from Egypt with her husband and four children. The woman who launched the verbal attack against her above 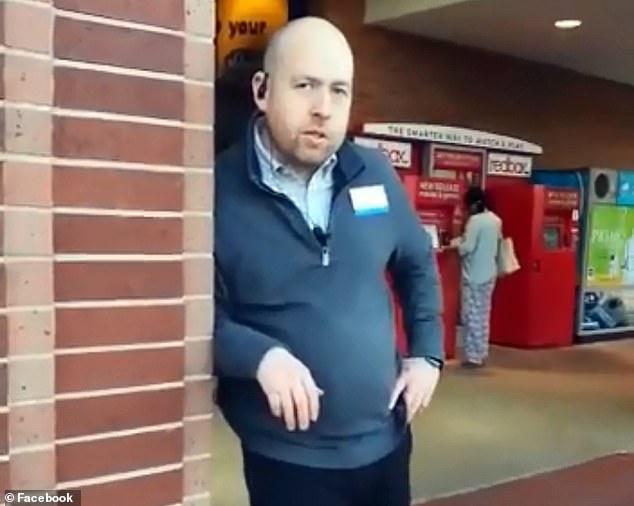 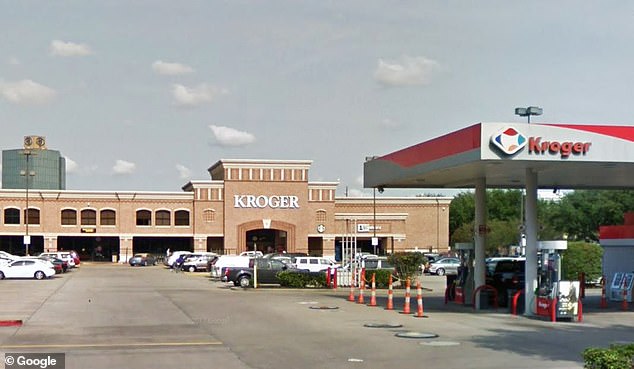 ‘Why is there so much ignorance in a city as culturally diverse as Houston? Why is someone as educated as my friend Mai being harassed in the store, told she looks and dresses “funny” then when she records the woman is further cursed and nearly attacked? Why didn’t the employee even step in to say that that was not tolerated on the property???’ Loughlin-Saleh wrote in her outraged post.

The unidentified woman behind the attack was a teacher at Awty International School in Houston and was subsequently fired following the viral video, according to Click2Houston.

‘A video that has been shared online features a recent exchange between the teacher and another woman in a grocery store parking lot. The video includes racially offensive or xenophobic language,’ AWTY said to DailyMail.com in a statement.

‘While the video only captures a portion of the exchange and we do not have all of the facts, it is clear that the teacher’s words and behaviors are counter to our school’s values,’ the statement added.

The school said it had not viewed such behavior from this teacher prior and ‘as a result of this behavior, the teacher’s employment at the school has been terminated, effective immediately.’

She has not been charged with a crime for the incident. 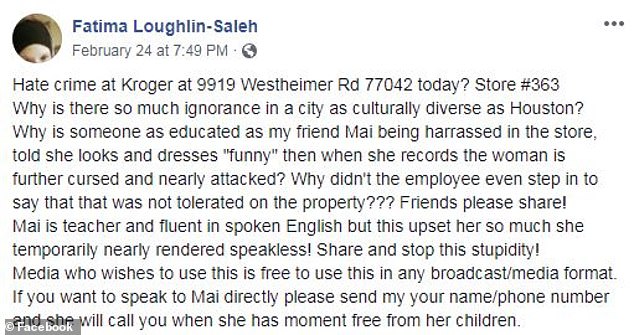 The video was then posted on Facebook by Mohamed’s friend Fatime Loughlin-Saleh on Sunday where it’s gone viral racking up 33,000 views 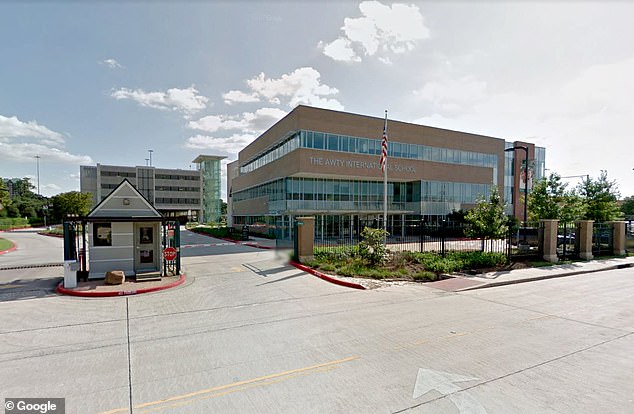 The assailant, who hasn’t been named, was a teacher at Awty International School in Houston and was fired after her explicit and xenophobic rant went viral

Following the incident Mohamed spoke with managers at the Kroger store. She’s also working with civil rights attorney Arsalan Safiullah to determine if the verbal attack constitutes as a hate crime.

DailyMail.com has reached out to her lawyer for comment.

The Council on American Islamic Relations in Houston responded to the incident by calling for other Muslim people in the community to report any bias incidents.

‘I mean, clearly it was a shocking incident. It’s very hateful. Whether it’s a hate crime, I’m going to have to look at more facts. It’s clearly xenophobic. Even when I saw [Mohamed] yesterday she was shaken by the incident,’ Safiullah said to Yahoo.

‘This hurt me to see Mai, who is so sweet, verbally abused like this when I know who she is as a person,’ Loughlin-Saleh added.

Kroger is yet reply to DailyMail.com’s request for comment, but posted to a user on Twitter: ‘We have identified this was an isolated incident involving two customers in the parking lot of our store.

‘The incident was upsetting, and our store manager tried to peacefully resolve the negative interaction. We value all our customers and apologize if anyone was made to feel less than welcomed.’

What are periscope cameras and why do they matter on your smartphone?

What are contact-tracing apps and how will they help you?

5 ways to be a better ally in the office, according...