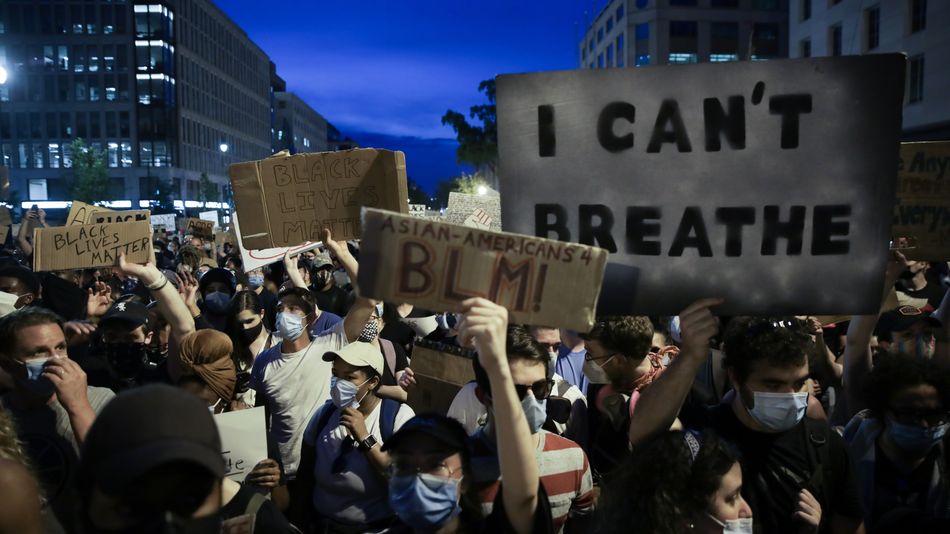 Medical professionals on the front lines of the coronavirus pandemic are not happy with government officials who talk about “contact tracing” protesters.

Not only are they concerned that protests, which have occurred in more than 350 U.S. cities, will lead to new clusters of COVID-19 outbreaks. They’re also frustrated by how public officials are talking about those protests, and worried it could hamper efforts to contain the coronavirus.

Last weekend, amid protests over police brutality and the killing of George Floyd, Minnesota Public Safety Commissioner John Harrington said law enforcement was “analyzing the data of who we’ve arrested.” He claimed it was “pretty similar” to their method of tracking COVID-19 cases. “It’s contact tracing,” he said.

Doctors and scientists say using the term “contact tracing” in relation to both law enforcement and healthcare is a serious problem.

“Who are they associated with? What platforms are they advocating for? … Is this organized crime? … We are in the process right now of building that information network.” pic.twitter.com/U0KNIVHnf6

Over the past 3 months, there have been more than 100,000 coronavirus deaths in the United States. Public health experts believe that, right now, the greatest tool in their arsenal against the pandemic is contact tracing.

So, what is contact tracing? Basically, it’s the process in which health professionals track down everyone an infected person recently came into contact with to prevent them from spreading the virus.

Dr. Alain Labrique, an epidemiologist and founding director of the Global mHealth Initiative at Johns Hopkins University, explained it as tamping down a brushfire before it can blaze out of control.

People who find out they have been exposed to COVID-19 can quarantine themselves during the virus’ roughly two-week incubation period to avoid spreading it to others.

Contact tracing alone will probably not eradicate COVID-19, but studies have shown that it can slow down its spread and help contain outbreaks.

“Any rhetoric that suggests that the identity of protestors would be unmasked using public health contact tracing is extremely harmful and could serve to reduce trust in this public health cornerstone,” said Labrique.

He noted that contact tracers do this all “without revealing the identity of the case.” That privacy is important, a major reason why some privacy experts are wary of contact-tracing apps.

Amnesty International discovered a vulnerability that “would have allowed cyber attackers to access highly sensitive personal information” in a contact-tracing app that residents of Qatar were forced to download.

“Contact tracing is built on trust, confidentiality and rapport,” Labrique said. And people are less likely to trust a health app if they think law enforcement might have access to it, especially if they’re undocumented, have a criminal record, or are just attending a protest.

Labrique’s concerns have been shared by other public health professionals and organizations, like the National Coalition of STD Directors. Other epidemiologists took to public social media to the rhetoric used in Minnesota.

This is not contact tracing! What is described in the video is police work. To see the two linked jeopardizes the credibility of public health, which needs community trust to work effectively. https://t.co/qcN7tVt4m8

“[Criminal investigations] are not ‘contact tracing’ activities and are not bound by the same code of medical and public health ethics to maintain” the privacy of the people involved, Labrique said.

Human rights and privacy advocates have also weighed in. The Electronic Frontier Foundation (EFF) has called on public health officials to protect the privacy of citizens in response to the rhetoric. It also has requested that officials the amount of data it collects for contact tracing.

Michael Kleinman, director of Amnesty International’s Silicon Valley Initiative, said in a statement that “proposals from governments that encourage increased surveillance endanger both our right to protest and our right to privacy.”

“Without public trust… tracing activities cannot succeed,” Labrique tells me. “Without this tool, the protests could serve as an incubator for a new wave of COVID-19, defeating our efforts and sacrifices made over these many weeks to stem the tide of this pandemic.”

Daily Steals Has a Refurbished Gaming Keyboard for Just $73

The cheapest iPhone 6S unlocked SIM-free prices in May 2019

Did Thala Ajith crank the camera for a portion of his...

Port Masters: inside the studios responsible for keeping your favorite games...

Looking at the journey of how NASA and its astronauts became...